These days, I spend most of my time thinking about microscopes and gene regulation and so forth, which makes it all the more of a surprising coincidence that on the eve of what looks to be a great math-bio symposium here at Penn tomorrow, I was doing some spring cleaning in the attic and happened across a bunch of old notebooks from my undergraduate and graduate school days in math and physics (and a bunch of random personal stuff that I'll save for another day—which is to say, never). I was fully planning to throw all those notebooks away, since of course the last time I really looked at it was probably well over 10 years ago, and I did indeed throw away a couple from some of my less memorable classes. But I was surprised that I actually wanted to keep a hold of most of them.

Why? I think partly that they serve as an (admittedly faint) reminder that I used to actually know how to do some math. It's actually pretty remarkable to me how much we all learn during our time in formal class training, and it is sort of sad how much we forget. I wonder to what degree it's all in there somewhere, and how long it would take me to get back up to speed if necessary. I may never know, but I can say that all that background has definitely shaped me and the way that I approach problems, and I think that's largely been for the best. I often joke in lab about how classes are a waste of time, but it's clear from looking these over that that's definitely not the case.

I also happened across a couple of notebooks that brought back some fond memories. One was Math 250(A?) at Berkeley, then taught by Robin Hartshorne. Now, Hartshorne was a genius. That much was clear on day one, when he looked around the room and precisely counted the number of students in the room (which was around 40 or so) in approximately 0.58 seconds. All the students looked at each other, wondering whether this was such a good idea after all. For those who stuck with it, they got exceptionally clear lectures on group theory, along with by far the hardest problem sets of any class I've taken (except for a differential geometry class I dropped, but that's another story). Of the ten problems assigned every week, I could do maybe one or two, after which I puzzled away, mostly in complete futility, until I went to his very well attended office hours, at which he would give hints to help solve the problems. I can't remember most of the details, but I remember that one of the hints was so incredibly arcane that I couldn't imagine how anyone, ever, could have come up with the answer. I think that Hartshorne knew just how hard all this was, because one time I came to his office hours after a midterm when a bunch of people were going over a particular problem, and I said "Oh yeah, I think I got that one!" and he looked at me with genuine incredulity, at which point I explained my solution. Hartshorne looked relieved, pointed out the flaw, and all went back to normal in the universe. :) Of course, there were a couple kids in that class for whom Hartshorne wouldn't have been surprised to see a solution from, but that wasn't me, for sure.

While rummaging around in that box of old notebooks, I also found some old lecture notes that I really wanted to keep. Many of these are from one of my PhD advisor's, Charlie Peskin, who had some wonderful notes on mathematical physiology, neuroscience, and probability. His ability to explain ideas to students with widely-varying backgrounds was truly incredible, and his notes are so clear and fresh. I also kept notes from a couple of my other undergrad classes that I really loved, notably Dan Roksar's quantum mechanics series, Hirosi Ooguri's statistical mechanics and thermodynamics, and Leo Harrington's set theory class (which was truly mind-bending).

It was also fun to look through a few of the problem sets and midterms that I had taken—particularly odd now to look at some old dusty blue books and imagine how much stress they had caused at the time. I don't remember many of the details, but I somehow still vaguely remembered two problems, one in undergrad, one in grad school as being particularly interesting. The undergrad one was some sort of superconducting sphere problem in my electricity and magnetism course that I can't fully recall, but it had something to do with spherical harmonics. It was a fun problem.

The other was from a homework in a linear algebra class I took in grad school from Sylvia Serfaty, and I did manage to find it hiding in the back of one of my notebooks. A simple-seeming problem: given an n×n matrix A, formulate necessary and sufficient conditions for the 2n×2n matrix B defined as

to be diagonalizable. I'll give you a hint that is perhaps what one might guess from the n=1 case: the condition is that A = 0. In that case, sufficiency is trivial (B = 0 is definitely diagonalizable), but showing necessity—i.e., show that if B is diagonalizable, then A=0—is not quite so straightforward. Or, well, there's a tricky way to get it, at least. Free beer to whoever figures it out first with a solution as tricky (or more tricky) than the one I'm thinking of! Will post an answer in a couple days. 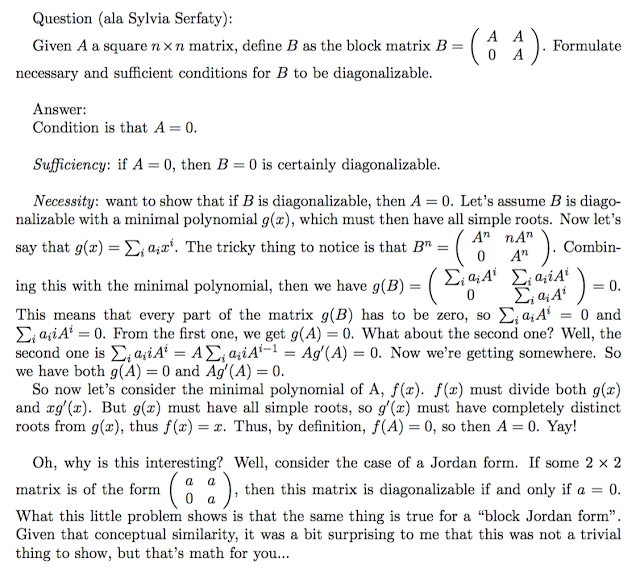 As readers of the blog have probably guessed, there is a distinct strain of futurism in the lab, mostly led by Paul, Ally, Ian and I (everyone else just mostly rolls their eyes, but what do they know?). So it was against this backdrop that we had a heated discussion recently about the implications of AlphaGo.

It started with a discussion I had with someone who is an expert on machine learning and knows a bit of Go, and he said that AlphaGo was a huge PR stunt. He said this based on the fact that the way AlphaGo wins is basically by using deep learning to evaluate board positions really well, while doing a huge number of calculations to determine what play to make to evaluate that position. Is that really “thinking”? Here, opinions were split. Ally was strongly in the camp of this being thinking, and I think her argument was pretty valid. After all, how different is that necessarily from how humans play? They probably think up possible places to go and then evaluate the board position. I was of the opinion that this is a different type of thinking than human thinking entirely.

Thinking about it some more, I think perhaps we’re both right. Using neural networks to read the board is indeed amazing, and a feat that most thought would not be possible for a while. It’s also clear that AlphaGo is doing a huge number of more “traditional” brute force computations of potential moves than Lee Sedol was. The question then becomes how close the neural network part of AlphaGo is compared to Lee Sedol’s intuition, given that the brute force logic parts are probably tipped far in AlphaGo’s favor. This is sort of a hard question to answer, because it’s unclear how closely matched they were. I was, perhaps like many, sort of shocked that Lee Sedol managed to win game 4. Was that a sign that they were not so far apart from each other? Or just a weird flukey sucker punch from Sedol? Hard to say. I think the fact that AlphaGo was probably no match for Sedol a few months prior is probably a strong indication that AlphaGo is not radically stronger than Sedol. So my feeling is that Sedol’s intuition is still perhaps greater than AlphaGo’s, which allowed him to keep up despite such a huge disadvantage is traditional computation power.

Either way, given the trajectory, I’m guessing that within a few months, AlphaGo will be so far superior that no human will ever, ever be able to beat it. Maybe this is through improvements to the neural network or to traditional computation, but whatever the case, it will not be thinking the same way as humans. The point is that it doesn’t matter, as far as playing Go is concerned. We will have (already have?) created the strongest Go player ever.

And I think this is just the beginning. A lot of the discourse around artificial intelligence revolves around the potential for artificial general super-intelligence (like us, but smarter), like a paper-clip making app that will turn the universe into a gigantic stack of paper-clips. I think we will get there, but well before then, I wonder if we’ll be surrounded by so much narrow-sense artificial super-intelligence (like us, but smarter at one particular thing) that life as we know it will be completely altered.

Imagine a world in which there is super-human level performance at various “brain” tasks. What will be the remaining motivation to do those things? Will everything just be a sport or leisure activity (like running for fun)? Right now, we distinguish (perhaps artificially) between what’s deemed “important” and what’s just a game. But what if we had a computer for doing proving math theorems or coming up with algorithms, one vastly better than any human? Could you still have a career as a mathematician? Or would it just be one big math olympiad that we do for fun? I’m now thinking that it’s possible for virtually everything humans think is important and do for "work" could be overtaken by “dumb” artificial narrow super-intelligence, well before the arrival of a conscious general super-intelligence. Hmm.

Anyway, for now, back in our neck of the woods, we've still got a ways to go in getting image segmentation to perform as well as humans. But we’re getting closer! After that, I guess we'll just do segmentation for fun, right? :)
Posted by AR at 12:54 PM 4 comments: