I’ve had several PIs tell me during grad school, ‘Ideas are cheap.’ (This phrase usually comes up in conversations discussing the challenges of carrying a project to completion.) It’s certainly true that finishing projects requires creativity, innovation, thoughtfulness, and persistence. However, I think that really good ideas are extremely rare and precious.

I’ve spent a fair amount of time in grad school thinking about new avenues to pursue and new questions to answer, and I find it one of the most challenging parts of science. A really good idea for a project requires a number of attributes, including a well-defined question to answer, interest, novelty, technical feasibility, a ‘go-or-no-go’ point such that you can quickly decide if the project has merit, and so on.


Here are some things that have helped me try to identify interesting projects:


I’d love to hear if anyone has other suggestions or habits when trying to identify new directions in science!
Posted by Caroline Bartman at 3:40 PM 2 comments:

The kinship of the arcane

Just had a great visit to University of Calgary, and one of the highlights was meeting with Jim McGhee. It was a feeling I’m sure many of you have had as well—finally meeting someone whose papers have been really influential in your life. In this case, it took me back first to my postdoc, when Jim’s work on C. elegans intestinal development formed much of the basis for work we did on incomplete penetrance. Many of his papers were amongst my most well-thumbed when we were working on that project, and were simply invaluable as we tried to piece our findings together. Then, my fledgling lab’s fate intertwined with Jim’s again when we (meaning Gautham and I) started asking questions about cell cycle and gene expression timing during intestinal development. Gautham is a true scholar, and as this project progressed, we were continually drawn to Edgar and McGhee, "DNA Synthesis and the Control of Embryonic Gene Expression in C. elegans", Cell 1988, a classic paper on this same question.

We would read that paper over and over, delving into each minor point in detail, all the while wondering who this “Lois Edgar” was, marveling at skill and fortitude that must have been required to pull off those seemingly impossible experiments. To give you a sense of what was involved, the question was DNA replication was required for expression of certain genes during development (i.e., is cell cycle somehow a timing mechanism). To answer the question, Lois would take live embryos at precise stages, permeabilize their eggshells through mild smushing or completely removing them via pipetting, then add aphidicolin to inhibit DNA synthesis, and then trace those embryos over time to look for expression of gut specific factors. These are most certainly NOT easy experiments to do, and I (think) I remember my friend John Murray telling us that McGhee said that only Lois Edgar could do those experiments. Gautham also found this really interesting self-profile by Lois in which she talks about her career going to graduate school at age 40 (!). She sounded like a very interesting person to both of us.

So I was sort of nervous to meet Jim. What would he be like? Gregarious and fun? Quiet and bitter? Well, unsurprisingly for a worm person, he was wonderful! We had a great time over dinner talking about various things, including, of course, Lois Edgar, and about the many hours she spent at the microsope watching worms. Also, he talked about how she was a very talented artist. Indeed, the next day, he showed me this lovely rendition of the worm she drew for him many years ago that only an artistic geneticist (or genetically-inclined artist?) could create: 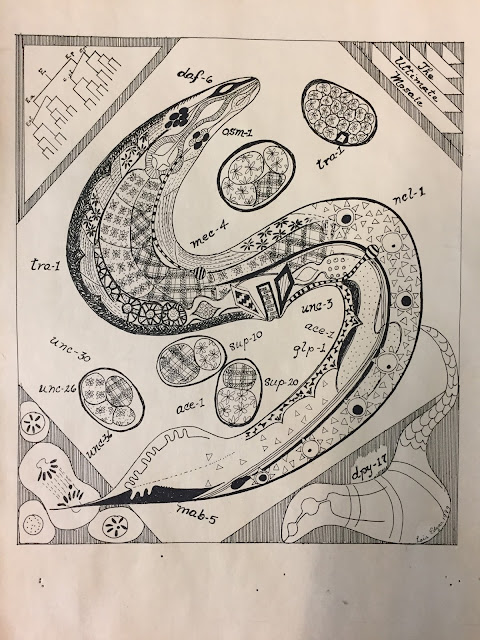 Apparently she has now indeed followed through on her promise to retire from science and go back to art, and makes pottery at her home in Boulder. I actually go to Boulder fairly often, and I’m thinking I should try and meet up with her next time I’m out there.

Which, upon reflection, is a bit odd. After all, how strong can a connection be between two strangers linked by nothing but a model organism and some gene names? I think that’s actually part of the magic of science: at its purest, it’s a kinship, passed through generations, forged by a common interest in arcane details and minor subtleties that perhaps only three or four people in the world know, much less care about.

I also had the opportunity to meet two of Jim’s students, and I’m happy to report that they are doing some very cool science. It has been a while since I’ve thought about intestinal development in worms, but talking with them was like putting on an old pair of shoes—it was nice to talk about old friends like elt-2 and end-3. I could sense that the students enjoyed talking with someone who knew the details of the system to which they have devoted a fair fraction of their waking hours to studying. One of them had a marked up copy of our C. elegans paper out, and I pointed out a minor detail about ectopic expression in hda-1 knockdown worms that is very easy to miss in the paper and might be relevant to their work. In the end, it is people who keep a field alive, speaking to each other imperfectly over the years through dusty pages.
Posted by AR at 4:53 PM 1 comment: