We had some serious issues in the lab over the last several months. In mid-June, our favorite food truck (okay, Ally's and mine), New York Gyro, disappeared from the corner of 38th and Walnut, only to be replaced by some other New York Gyro guy. Okay, no big deal, one New York Gyro is as good as the next, right? Oh, how so very naive, my friend. There is this New York Gyro (affectionately referred to as "Far Gyro" because it's sort of, well, far), and then there's everyone else. His chicken over rice is hands-down the best. And a free drink?! What more can you ask for. So we thought, okay, he's leaving for Ramandan, no big deal. Well, Ramadan came and went, but no Far Gyro. At first, well, maybe he tacked on a vacation. Then maybe it was some family thing. Then... well, let's just say we were hoping that he had somehow gotten bumped off his spot and was out there, somewhere, waiting for us to find him. It got to the point where Martha (from the Winkelstein lab) made this sign: 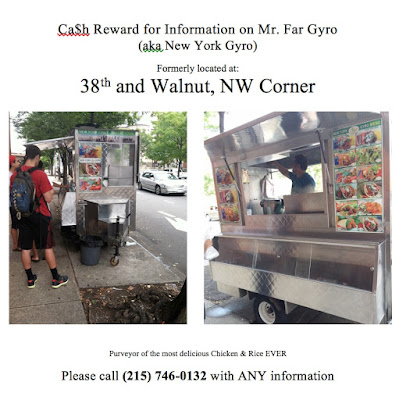 Meanwhile, some usurper had taken his place, driving down the ratings on Yelp for New York Gyro on 38th and Walnut. Blasphemy! And then...


Far Gyro is now Super Far Gyro, having resurfaced on 41st and Walnut! Rohit just happened to see him because he lives right there. Well worth the additional 3 blocks of walking. Whew.

Anyway, if you have never been to this particular truck, give it a try sometime. Chicken over rice, all the sauces, hold the lettuce (well, that last part is just for me–I have boycotted lettuce as a waste of precious time and space).
Posted by AR at 7:30 AM No comments:

Email ThisBlogThis!Share to TwitterShare to FacebookShare to Pinterest
Labels: life in the lab

Top 10 signs that a paper/field is bogus

These days, there has been a lot of hang-wringing about how most papers and wrong and reproducibility and so forth. Often this is accompanied with some shrill statements like “There’s a crisis in the biomedical research system! Everything is broken! Will somebody please think of the children?!” And look, I agree that these are all Very Bad Things. The question is what to do about it. There are some (misguided, in my view) reproducibility efforts out there, with things like registered replication studies and publishing all negative results and so forth. I don’t really have too much to say about all that except that it seems like a pretty boring sort of science to do.

So what to do about this supposed crisis? I remember someone I know telling me that when he was in graduate school, he went to his (senior, pretty famous) PI with a bunch of ideas based on what he'd been reading, and the PI said something along the lines of "Look, don't confuse yourself by reading too much of that stuff, most of it’s wrong anyway". I've been thinking for some time now that this is some of the best advice you can get.

Of course, that PI had decades of experience to draw upon, whereas the trainee obviously didn't. And I meet a lot of trainees these days who believe in all kinds of crazy things. I think that learning how to filter out what is real from the ocean of scientific literature is a skill that hopefully most trainees get some exposure to during their science lives. That said, there’s precious little formalized advice out there for trainees on this point, and I believe that a little knowledge can go a long way: for trainees, following up on a bogus result can lead to years of wasted time. Even worse is choosing a lab that works on a bogus field–a situation from which escape is difficult. So I actually think it is fair to ask “Will somebody please think of the trainees?”.

With this in mind, I thought it might be useful to share some of the things I've learned over the last several years. A lot of this is very specific to molecular biology, but maybe useful beyond. Sadly, I’ll be omitting concrete examples for obvious reasons, but buy me a beer sometime and then maybe I'll spill the beans. If you’re looking for a general principle underlying these thoughts, it’s to have a very strong underlying belief system based in Golden Era molecular biology. Like: DNA replication, yeah, I’m pretty sure that’s a thing. Golgi Apparatus, I think that exists. Transcription and translation, pretty sure those really happen. Beyond that, well…

I offer these more as a set of guidelines for how I like to think about new results, and I’m sure we can all think of several counterexamples to virtually every one of these. My point is that high-level thinking in molecular biology requires making decisions, and making a real decision means leaving something else on the table. Making decisions based on the literature means deciding what avenues not to follow up on, and I think that most good molecular biologists learn this early on. Even more importantly, they develop the social networks to get the insider’s perspective on what to trust and what to ignore. As a beginning trainee, though, you typically will have neither the experience nor the network to make these decisions. My advice would be to pick a PI who asks these same sorts of questions. Then keep asking yourself these questions during your training. Seek out critical people and bounce your ideas off of them. At the same time, don’t become one of those people who just rips every paper to shreds in journal club. The point is to learn to exhibit sound judgement and find a way forward, and that also means sifting out the good nuggets and threading them together across multiple papers.

As a related point, as I mentioned earlier, there’s a lot of fuss out there about the “reproducibility crisis”. There’s two possible models: one in which we require every paper to be “true”, and the more laissez-faire model I am advocating for in which we just assume a lot of papers are wrong and train people to know the difference. Annoying reviewers often say that extraordinary claims require extraordinary evidence. I think this is wrong, and I’m not alone (hat tip: Dynamic Ecology). I think that in any one paper, you do your best, and time will tell whether you were right or wrong. It’s just not practical or efficient for a paper to solve every potential problem, with every result cross-validated with every method. Science is bigger than any one paper, and I think it’s worth providing our trainees with a better appreciation of that fact.

Another point from Casey Bergman:

Lemaitre: be skeptical of results where there is a big paper with no follow-up #wtdros14
— Casey Bergman (@caseybergman) August 2, 2014

Email ThisBlogThis!Share to TwitterShare to FacebookShare to Pinterest
Labels: how to do science, meta-science

A fun day in the lab

Yesterday was a really great day in the lab! Olivia, who graduated in May, came back from her trip to dance camp to have lunch with us... and showed off her new engagement ring! Awesome! And with one of the best engagement speeches ever from her fiancé Derek (as seen on Facebook). Olivia's answer to the big question? "Okay, fine."

Also, it was Maggie's birthday, and Ally made this fantastic cake made of fruit and yogurt: 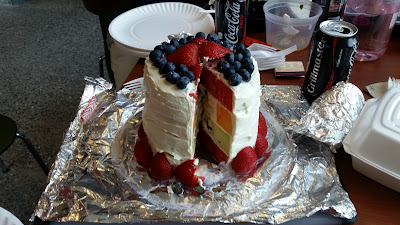 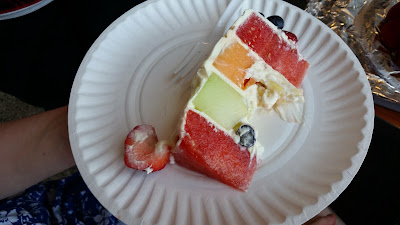 Then we went to Taco Tuesday at Wahoo's and enjoyed a lovely summer evening outside with beer, tacos and cornhole.

Email ThisBlogThis!Share to TwitterShare to FacebookShare to Pinterest
Labels: life in the lab

Last week, I went to the Penn MSTP retreat (for MD/PhD and VMD/PhD students), which was really cool. It truly is The Best MSTP Program in the Galaxy™, with tons of very talented students, including, I'm proud to say, four in our lab! There was lots of interesting and inspiring science in talks and posters throughout the day, and I also got to meet with a couple of cool incoming students, which is always a pleasure.

One thing I noticed several times, however, was the pernicious habit of mentioning of what journals folks in the program were publishing in or somehow associated with, emphasizing, of course, the fancy ones like Nature, etc. I noticed this in particular in the introduction of the keynote speaker, Chris Vakoc (Penn alum from Gerd Blobel's lab), because the introduction only mentioned where his work was published and didn't say anything about what science he actually did! I feel it bears mentioning that Chris gave a magnificent talk about his work on chromatin and cancer, including finding an inhibitor that actually seems to have cured a patient of leukemia. That's real impact.

I've seen these "impact-factor introductions" outside of the MSTP retreat a few times as well, and it really rubs me the wrong way. Frankly, being praised for the journals you've published in is just about the worst praise one could hope for. In a way, it's like saying "I don't even care enough to learn about what you do, but it seems like some other people think it's good". Remember, "where" we publish is just something we invent to separate out the mostly uninteresting science from the perhaps-marginally-less-likely-to-be-uninteresting-but-still-mostly-uninteresting science. If you actually are lucky enough to do something really important, it won't really matter where it's published.

What was even more worrisome was that the introduction for the speaker came from a (very well-intentioned) trainee. I absolutely do not want to single out this trainee, and I am certain the trainee knows about Chris's work and holds it in high regard. Rather, I think the whole thing highlights a culture we have fostered in which trainees have come to value perceived "impact" more than science itself. As another example, I remember bumping into a (non-MSTP) student recently and mentioning that we had recently published a paper, and rather than first asking what it was about, they only asked about where it was published! I think that's frightening, and shows that our trainees are picking up the worst form of scientific careerism from us. Not that I'm some sort of saint, either. I found it surprising to read BioRxiv recently and feel a bit disoriented without a journal name on the paper to help me know whether a paper was worth reading. Hmm. I'm clearly still in recovery.

Now, I'm not an idealist, nor particularly brave. I still want to publish papers in glossy journals for all the same reasons everyone else does, mostly because it will help ensure someone actually reads our work, and because (whether I like it or not) it's important for trainees and also for keeping the lab running. I also personally think that this journal hierarchy system has arisen for reasons that are not easy to fix, some of which are obvious and some less so. More ideas on that hopefully soon. But in the meantime, can we all at least agree not to introduce speakers by where they publish?

Incidentally, the best introduction I've ever gotten was when I gave a talk relatively recently and the introducer said something like "... and so I'm excited to hear Dr. Raj talk about his offbeat brand of science." Now that's an introduction I can live up to!
Posted by AR at 8:56 AM 7 comments: