I think Apple is killing the keyboard by slow boiling

I’m pretty sure Apple is planning to kill the mechanical keyboard in the near future. What’s interesting is how they’re going about it.

Apple has killed/"moved forward" a lot of tech by unilateral fiat, including the floppy drive, DVD drive, and of course various ports and cables. (Can we just stop for a minute and consider the collective internet brainpower wasted arguing about the merits of these moves? (Yes, I can appreciate the irony.).)

The strategy with the keyboard, however, is something different. For the past several design iterations, the keyboard travel has been getting thinner and thinner, to the point where the travel on the latest keyboards is pretty tiny. It’s pretty easy to see that the direction Apple is headed is towards a future in which the keyboard has no mechanical keys, but is rather some sort of iPad like thing, perhaps with haptic feedback, but with no keys in the traditional sense of the term. (The force touch trackpad and the new touch bar are perhaps harbingers of this move.)

What’s interesting is how Apple is making this transition. With the other transitions, Apple just pulls the plug on a tech (Firewire, I barely knew thee), leading to squealing by a small but not insignificant number of very visible angry users, modestly annoyed shrugs from everyone else, and a Swiss-Army-knife-like conglomeration of old projector adapters wherever I go give presentations. With this keyboard transition, though, the transition has been far more gradual—and the pundit class has consequently been far more muted. Instead of the usual “Apple treats their users with utter contempt!” “Apple is doomed by their arrogance!” and so forth, the response is more like “huh, weird, but you’ll get used to it.” Perhaps this reflects more the fact that there’s no way to “transition” to a new port interface (there is no port equivalent to “reduced key travel”, although perhaps microUSB qualifies), but still.

Why might Apple be doing this? There are three possibilities I can think of. First, one formal possibility is that there could be some convenience/cost benefit to Apple to doing this, like reduced component cost or whatever. This strikes me as unlikely for a number of reasons, not least of which being that it is almost certainly a pain in the butt to keep designing new keyboards. Another possibility is that the there is some tradeoff, most obviously with thickness: clearly, having a shorter travel will let you make a thinner computer. While this is a likely scenario, and perhaps the most likely, there are some reasons to question this explanation. For instance, why do the keyboards on the desktop Macs (remember those?) also have shorter key travel now? One could say that it’s to maintain parity with laptops, but then again, anyone suffering through desktop Macs these knows that parity isn’t exactly the name of Apple’s game these days—frankly, the keyboard is just about the only thing that got updated on the iMacs in the last several years. Which leads to the third possibility, which is that having a non-mechanical keyboard (essentially a big iPad) down there would enable new interfaces and so forth. Hmm. Well, either way, I think we’ll find out soon.
Posted by AR at 11:48 AM 2 comments:

Email ThisBlogThis!Share to TwitterShare to FacebookShare to Pinterest
Labels: miscellaneous

Why care about the Dow? Why not?

Just listened to this Planet Money podcast all about hating on the Dow Jones Industrial Average. Gist of it: the Dow Jones calculates its index in a weird (and most certainly nonsensical) way, and is an anachronism that must die. They also say that no market "professional" (quote added by me) ever talks about the dow, but measures like the S&P 500 and the Wilshire 5000 are far more sensible.

This strikes me as a criticism that distracts from the real issue, which is whether one should be using any stock market indicator as an indicator of anything. Sure, the Dow is "wrong" and the S&P 500 is more "right" in that they weight by market cap. Whatever. Take a look at this:

Pretty sure that this fact goes back longer as well, but Wolfram Alpha only goes back 5 years and I've already wasted too much time on this. Clearly, also, short term fluctuations are VERY strongly correlated—here's the correlation with the S&P 500 in terms of fluctuations: 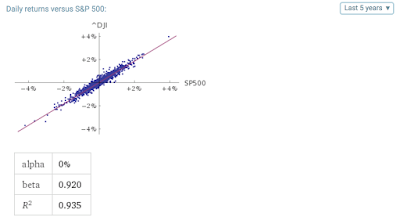 So I think the onus is on the critics to show that whatever differences there are between the S&P and the Dow are meaningful as predicting something about the economy. Good luck with that.

Of course, as an academic, far be it from me to decry the importance of doing something the right way, even if it has no practical benefit :). That said, in the podcast, they make fun of how the Dow talks about its long historical dataset as an asset, one that outweighs its somewhat silly mode of computation. This strikes me as a bit unfair. Given the very strong correlation between the Dow and S&P 500, this long track record is a HUGE asset, allowing one to make historical inferences way back in time (again, to the extent that any of this stuff has meaning anyway).

I think there are some lessons here for science. I think that it is of course important to calculate the right metric, e.g. TPM vs. FPKM. But let's not lose sight of the fact that ultimately, we want these metrics to reflect meaning. If the correspondence between a new "right" metric and an older, flawed one is very strong, then there's no a priori reason to disqualify results calculated with older metrics, especially if those differences don't change any *scientific* conclusions. Perhaps that's obvious, but I feel like I see this sort of thing a lot.
Posted by AR at 7:57 AM No comments: